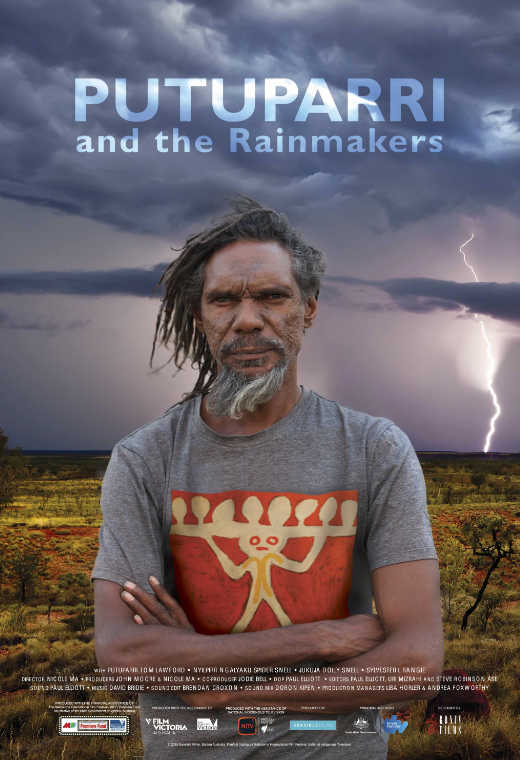 A man caught between two worlds.

Ten years in the making, the film is an extraordinary eyewitness account of the living traditions of Putuparri’s people. The film spans 20 transformative years in the life of Tom "Putuparri" Lawford as he navigates the deep chasm between his Western upbringing and his determination to keep his traditional culture alive. Director Nicole Ma documents Putuparri's journey, travelling with him and his family on numerous occasions to Kurtal, a sacred waterhole in the Great Sandy Desert where they ritually make rain. Kurtal is a site of deep spiritual significance for Putuparri and his family and the subject of a long term native title claim over the area. Tom "Putuparri" Lawford is a man caught between two worlds: his future as a leader of his people, reconnecting with his ancestral lands and shouldering his responsibility to pass this knowledge on to the next generation; and both his past and present in modern society, where he battles with alcoholism and domestic violence. Set against the backdrop of this long fight for ownership of traditional lands Putuparri and the Rainmakers is an emotional, visually breathtaking story of love, hope and the survival of Aboriginal law and culture against all odds. Putuparri and the Rainmakers is the winner of the $100,000 Cinéfest Oz Film Prize (2015) which is an open competition for Australian feature films. It is the first time a documentary feature has been in competition, let alone won the prize. Putuparri had its Australian premiere at the Melbourne International Film Festival in August 2015 and was nominated for most popular Australian documentary. To date it has been nominated for ATOM, ASSG and ASE awards. “A stunning story of Aboriginal culture, life and law" (Sandy Toussaint, The Conversation) This film is incredible. One of the most powerful films I have ever seen on this subject. If you get a chance to see it, do." Karl Quinn ABC Radio 774 "It's political and personal, serious and light hearted, and never less than striking to look at. ☆☆☆☆ " Philippa Hawker The Age & SMH "In this enthralling and ambitious documentary, film-maker Nicole Ma uses the hard-won changes in the life of Tom Lawford to examine the distance between the traditional and modern way of life. ☆☆☆☆ " Craig Matheson Sunday Age "A story and characters so compelling and emotionally engaging, that it reinforced the power of cinema to entertain, touch us deeply and stay with us forever." David Wenham Cinefest Oz Jury
Host a cinema screening