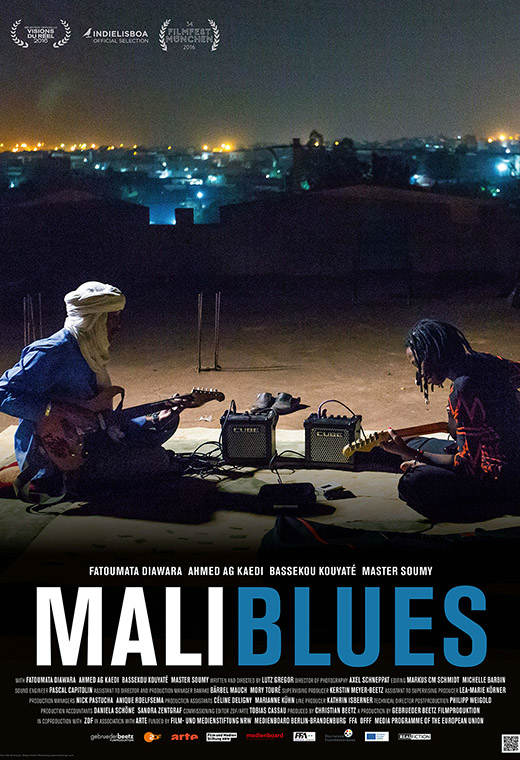 MALI BLUES tells the story of four female and male musicians from the West African country of Mali, who espouse with their music a tolerant Islam and a country at peace.

The West African country of Mali is considered the birthplace of the blues, brought later by abducted slaves to America’s cotton fields. For centuries traditional music has unified Mali’s society. Yet the music of Mali is in jeopardy. Radical Islamists introduced sharia law in the country’s northern part, prohibiting dance and secular music, destroying instruments, and threatening musicians. Many musicians fear for their lives and flee from the region around the cities of Timbuktu and Kidal. But the Islamist terror has by now expanded to other parts of Mali as well. The UN war effort is being further increased; the German Bundeswehr army has been operating there, too, for the past three years. The cinematic feature film MALI BLUES tells the story of four musicians who refuse to accept hatred, suspicion, violence, and a radical interpretation of Islam in their country. That is, neither in Mali nor in any other place in the world. International shooting star Fatoumata Diawara, Ngoni virtuoso and traditional griot Bassekou Kouyaté, young rap singer Master Soumy, and guitar virtuoso Ahmed Ag Kaedi, leader of the Tuareg band Amanar – they all have one thing in common: their music unites, comforts, and heals, and it lends the people the vigor to bring about change and a mutual future in peace.
Host a cinema screening